The lie that is rail privatisation

A better railway – for whom? Not the travelling public that’s for sure

Much was said with the publication of Labour’s 2017 Manifesto about renationalising the railways. To hear the newspaper reports at the time, it was as though Labour wanted to take us back to the 1960s and the days of inefficient British Rail.

The detractors should have focused their attention instead on the case of the East Coast franchises. This story highlights the second spectacular failure of a private rail partnership in a decade.

The past is another country and to compare how our railways were once ran (the era of printed time-tables, mechanical signaling and outdated rolling stock) is wholly inappropriate. In the case of the East Coast franchise, the line had been failing for a while and the Labour government in 2009 was forced to bring it back into public ownership for the want of finding a suitable franchisee to run it.

And do you know what happened? – with efficient management and no shareholders to pay, the company returned to profitability. Incredibly, in 2015, the Tory government privatized it again! What a great present to the Tories’ friends.

In a spectacular recent development, the second privatisation agreement has failed – a development which is set to cost the taxpayer hundreds of millions of pounds. We’ve covered that story in our article Rail fail.

And still this slavish adherence to the discredited doctrine of privatisation persists, at no benefit to the public who actually use the railways and pay more for their tickets year on year. Basingstoke travellers have seen a 27% rise in six years. 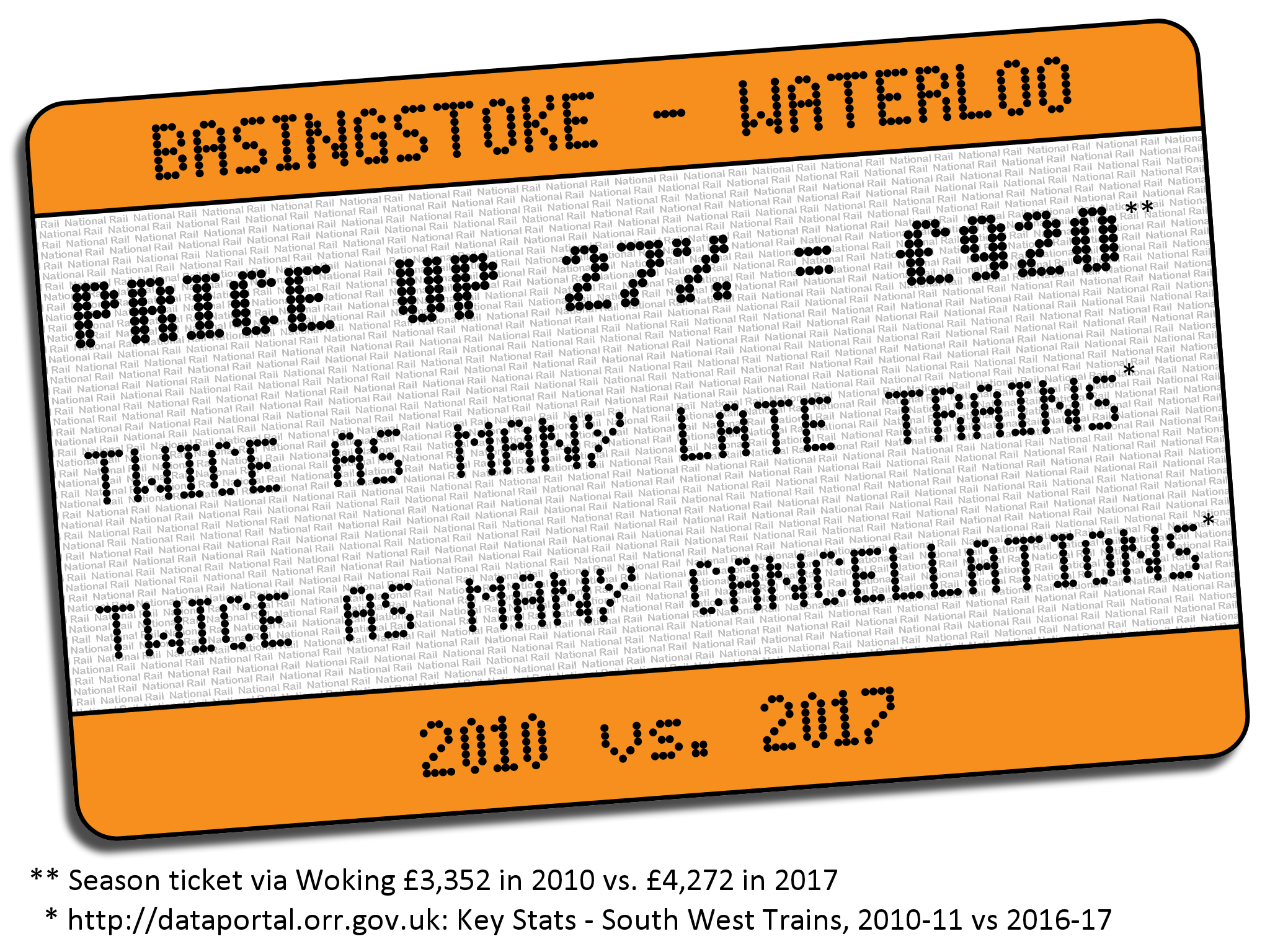 Labour proposals are not to wrench every rail company from objecting shareholders. As each franchise expires – and would under the present system go out to tender again – they will instead be brought back into public ownership. Managed in this way there will be no credible clamour to compensate shareholders, as for them the situation will be no different to losing a franchise to a rival company.

Indeed this is what happened when Aviva/Cross Country took over the route through Basingstoke from Virgin a few years ago. This is what the Tories did with The East Coast Line, except Labour will not waste time with a new franchise process. And this time Labour will not make a gift of the company back to shareholders for them to cream off the profits again, at travellers’ expense.

Some of the highest fares and worst services in Europe

Today, not many of our rail companies are not run by money-grabbing capitalists but instead by the public rail companies of France, Germany and the Netherlands. And despite the UK heading towards Brexit, more EU based rail companies than ever are bidding for a slice of the action as the Italian company Trenitalia SpA bids to run HS2.

They know how to run a nationalized rail company and any profits they make out of our railways are ploughed back into those in their own countries. There, the rolling stock is more modern, seats for commuters are available and fares are cheaper. But shouldn’t these benefits be felt instead by travellers in the UK, not those in other countries?

And what of the argument that the private sector runs a more efficient service than a publicly owned service can? Once again this is merely media hysteria in order to attempt to persuade us that a privately run railway is ‘A Good Thing’. Just ask any Basingstoke commuter, do more trains run on time? Are there fewer cancellations? It doesn’t seem so and these figures speak for themselves. 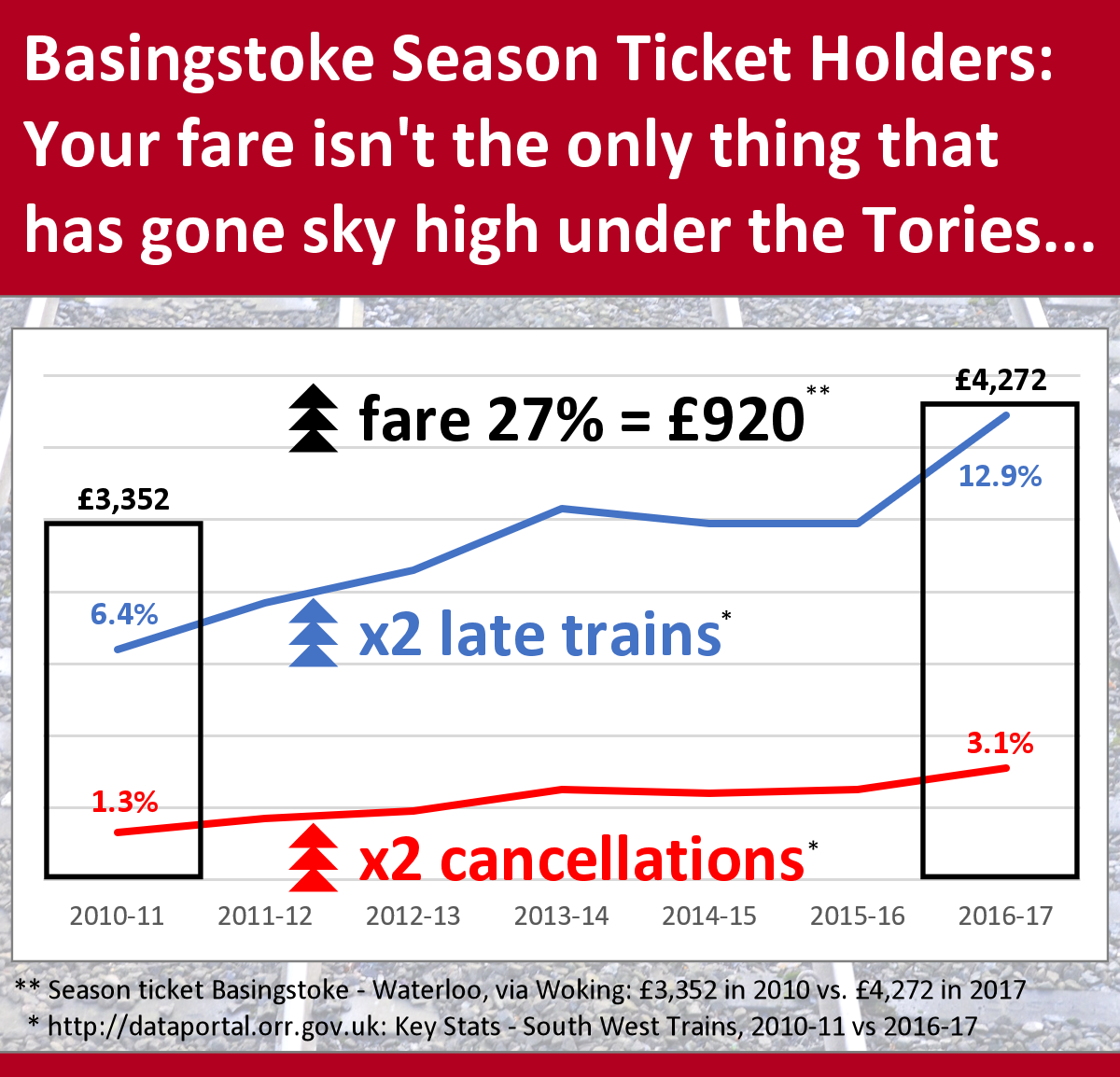 It is useful to know how our railways are organized. The system is fragmented and essentially divided into three. Network Rail is an arms-length public body of the Department of Transport. It owns the permanent way (that is the tracks and signaling and some 18 of the stations). The rolling stock (locomotives, carriages and some freight wagons) is owned separately by private rolling stock companies. They in turn lease the trains to the third sector, the train operating companies.

It is only Network Rail, where much capital investment is required with repairs and updated, that is still in public ownership. It is here that the huge costs apply and that is where we all as taxpayers foot the bill so that the private companies can make a profit for their share-holders.

Does that make sense? If the private operating companies make a profit, should that profit not be ploughed back into the infrastructure? Should all of us receive the benefit of modern rolling stock, an upgraded permanent way, and railway stations we can be proud of?

So in summary, Labour’s proposals are not so revolutionary, not backward looking at all but a sensible solution to improve our country’s railways, get traffic off the roads and to reduce pollution. And lastly, if fares have to rise, to ensure any profits made are spent on the railway network in the UK.

Taking the railways back into public ownership does in fact only mean the rolling stock and operating companies, the big stuff already belongs to us, so why should the country not own all of it? For far too long, we have seen rail passengers and taxpayers pick up the bill for failures in Tory management. It’s time to build a Britain that works for the many, not the few.